Like many organizations, the company I work for has a pretty diverse history (up to present times) when it comes to programming languages used, application type created and…to the point of this post…deployment methods. It is difficult to picture the future however, without picturing Clickonce deployed applications. Right now a number of our internal developer apps use Clickonce. This was an easy decision - we wanted easy deployment and total control over application versioning (and I don't mean source control) - Clickonce delivers in a big way.

So I've worked with Clickonce a little while now - setting up applications and deploying updates - the basics. But, in an effort to keep up to date (on a technology already at least 3 years old!!!) I decided to invest some time and learn a little more….leading to this first simple example.


In the following example I develop a simple launchpad-type application - a winform with 3 buttons - Accounting, LegalForms and RiskManagement in order to demonstrate one simple task - delayed assembly deployment.

Nobody can accuse this of being a realistic demonstration - but I wanted to demonstrate the ability to delay the deployment of assemblies until specifically required at runtime. The solution itself contains 5 projects - the startup form, and 4 assemblies called at runtime. The accounting/legal forms/risk management projects are basically shells returning string values - for demonstrative purposes. 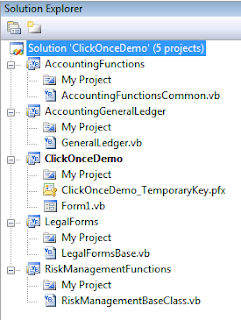 The deployment strategy is as follows: the ClickOnceDemo (project) is the only required download group. This is the startup project and obviously must be downloaded (or else the application couldn't run to begin with…). I created 3 other download groups - one for accounting assemblies and one each for risk management and legal assemblies. 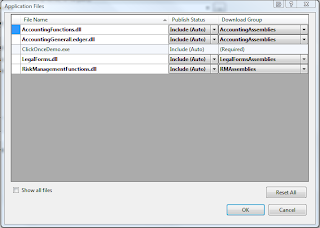 When the New method is invoked in my main form, an event handler is added for the AppDomain.CurrentDomain.AssemblyResolve event - and the LoadNeededAssemblies function is called. In short, when the application attempts to resolve an assembly that is not in memory, it calls this function. For the purposes of this demo, the relationship between deployment groups and physical DLLs is stored in a two dimensional array named 'assemblyToGroupMapping'. When LoadNeededAssemblies is invoked, we loop through this array searching for an assembly that matches the name passed in parameter 'args' of type ResolveEventArgs in the LoadNeededAssemblies function. Once we find an assembly that matches the one being resolved, we download the entire group using the DownloadFileGroup procedure in the System.Deployment procedure.

Once the filegroup has been downloaded (for brevity we used a synchronous download in this example but asynchronous download of groups is just as straight forward) we load the assembly into memory using the LoadFile procedure in the System.Reflection.Assembly namespace.

Once the assembly is resolved (i.e. the assembly is returned and the function exited) the application seamlessly continues its processing - using the objects in that assembly, in this case without the user ever knowing what was happening behind the scenes.

In the case of this demo, the event handler for each of the three buttons attempts to instantiate objects contained in assemblies which have not yet been downloaded - i.e. in the deployment groups that we have explicitly named. Clicking on a button (the first time only) results in the system attempting to resolve the required assembly and invoking the functionality just described. Once done, functions are called returning some feedback for demonstrative purposes.

There are two additional things to note in the above source code:

Popular posts from this blog

Introduction Let's talk about Mirth. At it's simplest, Mirth link is an Open Source HL7 interface engine. HL7 (Health Level 7) is an NPO involved in the development of healthcare standards and the HL7 v2.x and HL7 v3 standards are commonly used in Medical Information for data interchange - including but not limited to clinical, financial, logistical and administrative messaging. I first ran across Mirth over a year ago on a personal quest to find an alternative to our client's legacy HL7 application. Academically, I wrote a number of lexical analysis tools using lexx, yacc, bison and JavaCC and knew the challenges of writing and maintaining complex parsers. I was simply looking for something that could parse HL7 for us, and perhaps log messages and provide a little more transparency than our application currently allowed.  A year later and our legacy application is still going strong (read: my proposal was declined), but Mirth is being used in production, far away from the …
Read more

Visual Studio 2012 makes it really easy to debug in your browser of choice. Personally, I like to debug web apps in incognito mode. It has the advantage that it doesn’t cache scripts or CSS files so I can be guaranteed that whatever files I’m seeing are the latest and greatest…Setup couldn’t be simpler:Step 1Click the arrow beside your existing (IE by default) browser, select ‘Browse With…’ and click the ‘Add..’ button.Step 2Enter the following information:ProgramC:\Users\<your username>\AppData\Local\Google\Chrome\Application\chrome.exeArguments-incognitoFriendly NameChrome IncognitoStep 3Click on the Chrome Incognito browser option and get debugging.
Read more